This just ONE of the types of groups that run this Country today , and the courts and Government let it happen, even though there are laws against Vandalism, Hate Groups, and Harassment, and not one of these are protected by the Constitution.

But it seem that all these Groups have protection from the Government and the Courts, because when certain groups create HATE, VANDALISM, TOTAL DISRESPECT for the laws that are on the books, Governments and the Courts do NOTHING to enforce them, just make a new law.

When it comes to enforcing the law, these people stand and Quote the Constitution for their benefit, just like they did when it came to the American Flag a few years back, where they said under the Constitution that it was ok to BURN the American under your right to freedom speech, even though it is a Capital Offence to Desecrate, Deface or Burn the American Flag, and now we have a President who Swore to Protect and serve this Country and its Flag, WON”T even Honor it unless he is backed in to the wall, he turn his back on it when it is being Honored. 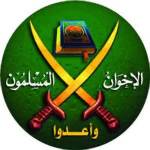 I bet he would He would Honor this,
the Muslim Brotherhood Flag.

As long as we have a Government and Courts who will not enforce the laws we have now, new laws are not going to do any thing about the Laws that are being violated  now, except fill another book of unenforced laws of this Country, so this kind of thing will never be stopped, unless ALL these laws are ENFORCED.

The sculpture was covered with red paint early Sunday, fair officials said, and the phrase “freedom for all” was scrawled on a viewing window in front of the cow.

A group called Iowans for Animal Liberation sent an image of the vandalism to the Des Moines Register, claiming responsibility.

“After dismantling the lock to the refrigerated case housing the Butter Cow with a screwdriver, we doused the entire butter sculpture in red paint,” the group wrote in an email to the Register. “The paint represents the blood of 11 billion animals murdered each year in slaughterhouses, egg farms, and dairies.”

Police are investigating the incident.

“The butter cow is something people come to the fair to see,” Iowa State Patrol Sgt. Scott Bright told the newspaper.

The annual fair, which began in 1854, attracts more than 1 million visitors a year. It’s also a popular quadrennial stop for presidential candidates hoping to catch the attention of Iowa voters, who traditionally hold the first in the nation voting contests.