It is time to throw out every one of the DICTATORS out of Washington before they sell this Country to the highest bidder for their own gain.

If you have not noticed, the Obama’s are taking over this country for their own profit, just look at what they have control of now, if the people put them back into office, there will not be a free country to call home, when the Government can walk in and take your kids away from you for no reason just because they think you don’t like your kids and not taking care of them.

Land Of The Free

This Country has a lot more to worry about then how to take care of
your kids, it looks like before long you will go to jail because you or your family are to fat for the Obama’s because Americans embarrass them.

The problem is the Obama’s think they are better than any one in the world, and think that they own the world and every one had better get out of their way or they will send you to jail.

There is a lot of child abuse going on with Mental, Physical and Sexual, but that is not as important as being over weight.

A Cleveland third grader who weighed more than 200 pounds was taken from his mother after officials reportedly said she did not do enough to help the boy, who suffered from a weight-related health issue, to lose weight. END_OF_DOCUMENT_TOKEN_TO_BE_REPLACED

Your money is burning a hole in their pockets.

The corpse of the Super Committee was not even cold before Democrats tore off their silly “deficit hawk” disguises and got back to spending your money like water.  As reported by The Hill, they’re itching to throw another $400 billion on the national debt, as quickly as possible: END_OF_DOCUMENT_TOKEN_TO_BE_REPLACED

Media Persecutes GOP With a Double Standard on Gaffes

The news media can’t be protecting the Democrats from covering up the screwing up of this country can they? Republicans are not any better, but at least their screw ups are front page, not stuck back in the Obits sections like the Democrats.

The Republican presidential nomination battle has had its share of “oops” moments—gaffes, mental lapses and verbal miscues. Not surprisingly, they’ve become the defining narrative about the GOP for a media desperate to distract the public from the Obama administration’s failures. END_OF_DOCUMENT_TOKEN_TO_BE_REPLACED

It is open season for the liberal media on any GOP presidential candidate who displays the audacity to surge in the polls, the latest targets being Herman Cain​ and Newt Gingrich​. A reasonable case can be made for some of these criticisms, and conservatives often concede the weaknesses, END_OF_DOCUMENT_TOKEN_TO_BE_REPLACED

U.S. and Europe Threaten Their Own Energy Independence

It’s been a rough month for Canada. America’s biggest trading partner and overall non-jerk country just wants to sell some oil to its friends. Sitting on a black-gold mine, Canada’s oil selling is unable to keep pace with production END_OF_DOCUMENT_TOKEN_TO_BE_REPLACED

FDA Kills Smokers, this is an under statement, FDA does more than that, read

all side affects on prescription drugs, and see just how deadly these drugs really are, and the FDA is telling you that they are safe because they approved them, if you believe that then you deserve what you get.

If you read the information that you get when you get your prescriptions (or see on TV), see just how safe (or deadly) these drugs are, if you have not figured out by now what gets passed and what does not, then you do not read what you get, or you don’t care, or you think that they are trust worthy and are looking out for your best interest. BETTER LOOK AGAIN.

Look at other things that can kill, Unleaded Gas, Diesel, Food, Water, TV, Sex, if you name it it will kill, but if it is approved by the FDA then it is safe, only if it is accompanied by $$$$$$.

“The FDA is responsible for protecting the public health.”

That’s what the Food and Drug Administration tells us on its website.

My intuition makes me grateful that the FDA is there to protect me — to make sure that every drug is proven both safe and effective — but “protection” kills people. END_OF_DOCUMENT_TOKEN_TO_BE_REPLACED 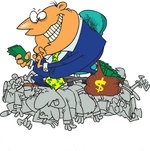 Imagine that, the people who are blocking job growth in this Country are people who depend on foreign money, that is what they live on, if this happens here then they will lose money, so if Government allows these jobs, that will cut into their comfortable income, is this why they don’t want them to pay the same taxes that the American middle and poor have to pay.

Check out the people who are trying to stop Job Growth in this Country and see what they have to gain by stopping jobs.

You see the rich get many, many more deductions on their taxes then the average American does.

This explains every thing, the Government Politicians, Environmentalist, Special Interest, and Lobbyist, don’t want to see jobs to start putting people to work here in this Country.

Key factions within the Democratic Party have been locked in a furious battle pitting jobs against the environment, with President Barack Obama in the hot seat to make the final call on a massive new pipeline project that also promises energy security.

The TransCanada Company wants to build the $13 billion Keystone XL pipeline to carry nearly 500,000 gallons of crude oil a day for consumption into the U.S.

Additionally, the project would create an estimated 20,000 jobs, plus another half a million indirect jobs within weeks of Obama’s approving the shovel-ready project, and bring hundreds of millions of dollars to local U.S. communities through property taxes. END_OF_DOCUMENT_TOKEN_TO_BE_REPLACED

This year will be a shock year to all who love to see their TAXES help every one else, the tax man comes, the tax man takes, the Government blows it on their crap, nothing to help the Legal American Citizen.

In a recent tax planning meeting with one of our clients, we shocked them with what their income tax future looked like for 2013 if Congress continues to do nothing to provide a long-term permanent set of tax laws (and it looks as if lawmakers are headed down this track).

They had no idea what tax breaks were expiring this year and next year, and how much it would cost them personally in extra income tax. But they aren’t alone, many Americans and even tax professionals aren’t aware that their tax bill could rise dramatically next year. END_OF_DOCUMENT_TOKEN_TO_BE_REPLACED

Time to sue the State Along With Stores

The Alcoholics and the Winos show their colors, booze is now more available any where they go, and the State will walk away from it like they are doing every where else.

Are the going to walk away from what they are going to cause, more health problems, deaths, Accidents, Robberies, and Shop Lifting.

Now who gets to enforce the new law, Oh yea the ones who were laid off for lack of funds, and will be lucky to see any of that money that was promised to them if passed. It just like every thing else, money collected, General fund spends it at what ever they want, just like the lottery.

Now what is the State going to do with the money from the people who are getting let go? REMEMBER FOR EVERY ACTION, THERE IS A REACTION, Just think of the fall out of more jobs, Now who is next, with the State going out of Business and privatizing every thing the State does, will it be the highway workers, State Weight Control, Unemployment Offices, Parks and Recreation, maybe the Washington State Patrol, with privatizing NO more State JOBS. Just Politicians, TIME WILL TELL!!!

Coming to a grocery store near you: Liquor

Costco is toasting its success.

And state liquor-store employees could use a drink.

The 166 stores where they work will close by June 1. Three of every five  voters were backing Initiative 1183 in early returns, choosing to join most  other states by withdrawing government from the liquor business. END_OF_DOCUMENT_TOKEN_TO_BE_REPLACED