Students who attend Chicago’s Little Village Academy public school get nothing but nutritional tough love during their lunch period each day. The students can either eat the cafeteria food–or go hungry. Only students with allergies are allowed to bring a homemade lunch to school, the Chicago Tribune reports.

“Nutrition wise, it is better for the children to eat at the school,” principal Elsa CarmonaÂ told the paper of the years-old policy. “It’s about … the excellent quality food that they are able to serve (in the lunchroom). It’s milk versus a Coke.”

But students said they would rather bring their own lunch to school in the time-honored tradition of the brown paper bag. “They’re afraid that we’ll all bring in greasy food instead of healthy food and it won’t be as good END_OF_DOCUMENT_TOKEN_TO_BE_REPLACED

Come on PEOPLE when are you going to stand up and have a back bone to fight what is going on in this country, if you can’t see that this country is almost a NANNY STATE RUN BY DICTATORS LIKE WHAT IS GOING ON IN LIBYA, you are going to wonder what happen to a FREE Country. 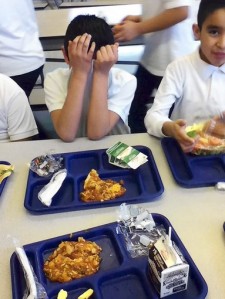 “Nutrition wise, it is better for the children to eat at the school,” (it is all about the money they can raise, not health)Carmona said. “It’s about the nutrition and the excellent quality food that they are able to serve (in the lunchroom). It’s milk versus a Coke. But with allergies and any medical issue, of course, we would make an exception.”

For many CPS parents, the idea of forbidding home-packed lunches would be unthinkable. If their children do not qualify for free or reduced-price meals, such a policy would require them to pay $2.25 a day for food they don’t necessarily like.

To encourage healthful eating, Chicago school doesn’t allow kids to bring lunches or certain snacks from home — and some parents, and many students, aren’t fans of the policy

A Little Village Academy student cringes at an enchilada dish served at his school. Many students throw away their entrees uneaten and say they would rather bring food from home. The school, though, does not allow students to bring in their own lunches, unless they have a medical condition or a food allergy.
(Monica Eng, Chicago Tribune / February 17, 2011) END_OF_DOCUMENT_TOKEN_TO_BE_REPLACED